The snare drum you hear in the background is the musical prelude to a big shift in currencies. If, as I anticipate, the EUR/USD starts to tumble (while, naturally, the dollar soars), we'll have everything we need for equities to start falling to pieces.

One of the charts from EWI's Short-Term Update, shown below, tells the story superbly. Notice how the slope (err, not "Slope" slope, but the regular slope), represented by the series of diagonal lines, gets decreasingly steep. This implies to me a tipping point that has either taken place or will take place in the near future.

I would also add that today is the first day in a while that the big profits that showed up in my account at the opening bell stuck around for the entire day. The only short position I closed was FXP, early in the morning; otherwise, I'm still short virtually across the board.

I'll probably do a post later tonight. I need to - what else? - catch up on my charts.

Above we see the S&P 500 e-mini futures (ES) on an hourly chart, illustrating the recent choppy, sideways action. If you click on the chart and look at the blue numbers above the volume bars, you'll see how the 20-day new highs (top number) and lows (bottom number) have shifted downward over this period. Indeed, we saw more new 20-day lows than highs today, a sign of deterioration in the broad stock market. This fits with my earlier view of the indicator, suggesting a narrowing base to the bull market.

Note: This indicator tracks all common stocks across the NYSE, NASDAQ, and ASE and is updated each morning before the market open via Twitter; follow here).
.

"Insider selling is 30x insider buying, while corporate stock buybacks are non-existent. Companies are saying they don't want to touch their own stocks."

"I don't know where the money is coming from to keep the markets from not plunging."

One can offer some suggestions. 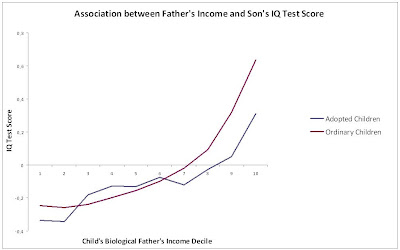 MIT's David Cesarini sends me the above chart with this note:

I prepared a graph which I think nicely illustrates the simple point you made in your blogpost on the spurious association between SES and test scores. The graph is attached. The dataset is comprised of a large sample of men born in Sweden between 1955 and 1970 who took an IQ test at conscription, at the age of 18. Income is measured as the biological father's income in the 1970 census.

I hope you find this useful.

In a May interview with Jane Hamsher and Marcy Wheeler of Firedoglake, The Chairman of the Senate Committee on Banking, Housing and Urban Affairs, Chris Dodd notes that information about who the bank recipients of Fed loans is "concerning", and that he would make such a request of the Federal Reserve. "I'll ask" is his summation of the questioning about why nobody besides the Fed is allowed to know where taxpayer capital goes to.

We, in turn, ask Chris Dodd to provide to not only his voters, but to the public in general any and all disclosure he has obtained from the Fed, due to Chairman's Dodd position as a public figure supervising numerous financial affairs, and we hope that his curiosity translates into support for any and all Fed audit initiatives, most specifically HR 1207 and S 604.

Hopefully, in the meantime the Chariman of the Banking Committee will learn the difference between AIG's counterparties and banks that have daily access to the Fed's discount window as well as other Maiden Lane, taxpayer funded conduits.

CNBC: What Banks are doing with Foreclosures

31. August 2009 CalculatedRisk Calculated Risk, Ökonomie
Diana Olick at CNBC has some BofA info: What Banks Are Really Doing With Foreclosures

According to BofA, they are not sitting on REOs (Real Estate Owned) for longer than normal, but they are holding off foreclosing - pending modification attempts. That is basically what the data says too.

The Q2 FDIC Quarterly Banking Profile showed the banks held $11.5 billion in 1-4 family residential REO at the end of Q2. That is the same level as the last several quarters.

But what has really changed is the surge in delinquencies - combined with the banks holding off foreclosing. As BofA notes, this will lead to a wave of foreclosures later this year and into 2010, however the size of the wave depends on the success of the modification programs (not looking great so far).
Foreclosure, REO

heh heh –  I am decidely not at one of these things this week:

It’s good to be back, especially on a sell off day when any meaningful counter rally attempt was met with aggressive selling. What was interesting today was the lack in participation - we got that early morning gap and then pretty much nothing for the remainder of the session. I was watching several overlapping entry signals on the geronimo side - which was indicative of various attempts to bang the tape higher but it seemed the bulltarts didn’t have the mojo necessary to close the gap - for now.

As a general observation - the spikes up appear to be met with large sell block orders - someone apparently keeps unwinding positions. Perhaps someone closer to the pulse perhaps is able to confirm this?

That’s all for now - I’ll be in touch later this evening for a quick update.

Boy, am I looking forward to that one