Here are some last minute reads to keep you busy while your significant other gets dressed tonite:

• Which professions have the most psychopaths? The fewest? (Barking Up the Wrong Tree)
• 2012: The Year in Graphs (Wonkblog)
• Experts back Deutsche whistleblowers FT Alphaville)
• No Matter How You Look at It, Apple’s Shares Are Cheap (Barron’s)
• In discussing compromise, remember: Republicans lost the election (The Plum Line) see also This Political Polarization Is Really Bad for America (Huffington Post)
• The Fiscal Cliff Is A Diversion: The Derivatives Tsunami and the Dollar Bubble (Paul Craig Roberts)
• Settlement Expected on Past Abuses in Home Loans (NYT) but see BofA Settlement Hits Snags (WSJ)
• The 15 Best Gadgets of 2012 (Paste)
• The Unhappy Marriage of Capitalism and Conservatism (Economix) see also Democrats and Republicans belong to different groups (Mischiefs of Action)
• A Congregation of Motherfuckers in the Senate (The Rude Pundit)

What are you doing tonight? And I am no longer the only economist noting that the House--not for the first time--is forcing the Administration to do what it should have been ready to do all along. In fact, Brad DeLong cites Tim Noah,* Scott Lemieux and Jon Chait(!), Aging Ezra, and Paul Krugman and Noam Schreiber,** while Jared Bernstein, last seen being willing to further reduce Senior Purchasing Power for a pair of dirty socks, puts it directly:

The thing that worried me most in the endgame is that the [White House] would be so intent on a deal that they’d lock in too few revenues with no path back to the revenue well, and that they’d leave the debt ceiling hanging out there.... Those fears will be realized unless the President really and truly refuses to negotiate on the debt ceiling and is willing to blow past those who would stage a strategic default. If he is not, and if this cliff deal passes, then I fear the WH may have squandered its hard won leverage.

That last is apparently politico-speak for "look who just s*at the bed." Thank G-d for House Republicans. Otherwise, this Administration would have killed itself long ago.

*Wherein I mix Hebrew and Yiddish in comments. This could become DeLong's first entirely non-English comments thread... **Sadly, I take this as more evidence that Slouching Toward Prosperity will not be published in my lifetime.

Gold Has Longest Streak of Annual Gains Since 1920

Gold rose, capping the longest annual gain since at least 1920, on renewed concern that central banks from Europe to China will take steps to spur economic growth and as U.S. leaders near a budget deal.

Gold futures for February delivery gained 1.2 percent to settle at $1,675.80 at 1:41 p.m. on the Comex in New York, while prices for immediate delivery jumped as much as 1.5 percent. Through Dec. 28, the metal had slumped for five straight weeks as the deadline for the so-called fiscal cliff of automatic tax increases and spending cuts due to take effect tomorrow loomed. President Obama said today at a White House event that an agreement was “within sight.”

The metal averaged a record $1,670.71 this year in New York even as it slid 6 percent since September, the biggest quarterly drop since 2004. The run of annual gains in the immediate delivery market is the longest since at least 1920. The Standard & Poor’s GSCI gauge of 24 commodities gained 0.3 percent

The amusing irony, as noted in Poison Pill and Gold Debate is that someone posting under the name "Uncle Frank" made the following accusation.

"Mish relishes chaos and financial ruin for this country so his gold holdings shoot-up in value. Everyone has an ulterior motive you know."

"Uncle Frank" is devoid of clear thinking because fiscal prudence is the one thing that would be bad for gold.

Repeating what I said earlier ....

Regardless of my personal beliefs regarding gold (that one would be prudent to buy and hold gold), I actually advocate government and Fed policies that are contrary to my recommendations.

My reasons are easily explained:


Should Congress actually do what I advocate, I think it would not be good for gold.

I recommend governmental actions on the basis of policy merit alone, not based on my stock market positioning. I find it very sad that few others do the same.

How Your Buy Order Gets Filled 31. Dezember 2012 By Paul Krugman Allgemein, Ökonomie, Paul Krugman
Not as bad a deal as some reports, but setting up the next crisis.
Kommentar hinterlassen Uncategorized

The Neverending Quest for a More Redistributionist Tax System

For example, I’m willing to reduce our government’s Medicare bills by finding new ways to reduce the cost of health care in this country. That’s something that we all should agree on. We want to make sure that Medicare is there for future generations. But the current trajectory of health care costs has gone up so high, we’ve got to find ways to make sure that it’s sustainable.

So there is still more work to be done in the tax code to make it fair, even as we’re also looking at how we can strengthen something like Medicare.

Translation: The deal we are about to strike will raise taxes on the rich. But the fiscal imbalances we face will remain unsustainably large.  So I will ask for more tax increases on the rich later.
Kommentar hinterlassen


After adjusting for seasonal factors, the HSBC Purchasing Managers’ Index™ (PMI™) – a composite indicator designed to give a single-figure snapshot of operating conditions in the manufacturing economy – posted 51.5 in December, up from 50.5 in November, signalling a modest improvement of operating conditions in the Chinese manufacturing sector. Moreover, it was the highest index reading since May 2011. 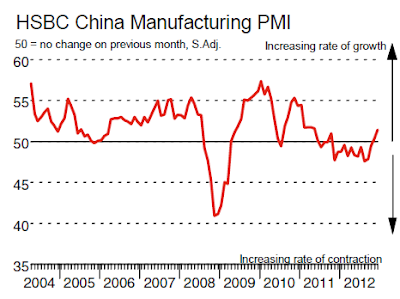 Input prices at manufacturing plants continued to increase in December, and for the third successive month. The rate of inflation eased slightly from November but remained marked overall. Average tariffs also increased during December, after remaining broadly similar in November. Output charges rose at an accelerated pace that, although modest, was the quickest in 14 months. Anecdotal evidence suggested that tariffs were raised in line with rising market demand and higher input costs.

Purchasing activity rose at a marked rate in December, the fastest since March 2011. Exactly 17% of panellists reported increased input buying. Consequently, stocks of purchases also rose. Even though the pace of stock accumulation was only slight, it was the quickest in two years. Rises in input buying and stocks of purchases were generally associated with higher new order volumes.

“December’s final manufacturing PMI picked up for the fourth consecutive month to a 19-month high, thanks to the faster new business flows and the end of destocking. Such a momentum is likely to be sustained in the coming months when infrastructure construction runs into full speed and property market conditions stabilise. This, plus Beijing’s reiteration of keeping pro-growth policy in place into the coming year, should support a modest growth recovery of around 8.6% y-o-y in 2013, despite the ongoing external headwinds.”

I beg to differ with Hongbin Qu.

Indeed, should either of those happen, China's already massive rebalancing problem will just get worse.


For a more realistic assessment on what is happening in China and why, please visit some of the above links.

This modest bounce in China PMI to a number barely above contraction is nothing to get excited about.


The White House and congressional negotiators have agreed to contours of a deal to avert the fiscal cliff including tax cut extensions, with the remaining sticking point being how to handle automatic military and domestic cuts, according to an official familiar with the talks.

Income tax cuts would be extended on families earning up to $450,000, the official said, with rates rising to 39.6 percent on incomes above that.

Rates on estate taxes would rise to 40 percent, on amounts above $5 million. Extensions of business tax breaks would continue through the end of 2013. There would be a permanent fix to the alternative minimum tax threshold.

The Medicare payment rate for doctors would be extended through 2013.

The contours of the possible deal would generate $600 billion toward deficit reduction. The debate over how to postpone automatic federal spending cuts remains. Democrats propose postponing it for a year, while Republicans want to allow cuts to begin taking effect with the new year.

Debate on How to Further Postpone Begins

In simple terms, Congress will achieve zero budget cuts if Democrats get their way. Republicans appear to be quite fine with that as long as military spending is not cut.

Thus, out of a trillion dollar budget deficit, Congress will have addressed a mere $60 billion a year in revenue and something close to $0 in budget cuts, allegedly avoiding a fiscal cliff but in reality creating a far bigger one a few years down the road.

Last year, before the election, Republicans could have gotten $10 in budget cuts for every $1 of additional revenue. Now they have agreed to tax hikes, getting virtually nothing in return.

The only hope for sanity is the House punts this bill a mile high, but don't count on it.

To some extent, this is a benefits tax view--a view that we should pay to society our fair share of what we get from society.  But the implication of this is not necessarily that everyone should sacrifice in order to put us all on a sustainable fiscal path.

With Ronald Reagan's election in 1980, the US saw a sea change in tax and regulatory policy.  While the policy was suppose to benefit everyone, it clearly hasn't.  For the bottom quintile of the income distribution, income has risen about 5 percent since 1982 (the first year in which Reagan's policies bit); for the next quintile, it has risen 8 percent; for the next, 11 percent, for the next, 20 percent, and for the highest, 45 percent.  But most of the highest quintile didn't do so well--the top 5 percent has seen average household income rise by 68 percent.

These data are before tax, and come from the US Census, Table H-3.  Before anyone suggests that this means that everyone has benefited, I should point out that average income in the lowest quintile of the income distribution is $11,239, which is right at the Federal Poverty Level for a single person household.  In a benefits tax view of the world, people who haven't sufficient income to live should not be taxed (they are living at subsistence levels as it is, and taxing them makes thing worse).

The fourth quintile, though, has seen a material improvement in incomes, so it is probably OK to ask this group for something--this includes people who nearly everyone would consider middle class.  Nevertheless, the lion's share of the benefits of the policy changes of the early 1980s has appeared to go to the top quintile, and so the top quntile should pay the most to put us on a sustainable fiscal path.

One last calculation--the top 5 percent got 57 percent of the income growth within its quintile.

It is true that households move in and out of quintiles, but as Dalton Conley shows, not as much as we would like to think,  In any event, we have not been all in it together when it has come to benefitting from the policies of the past 30 years.

Surplus/Deficit As A Percentage of GNP/GDP Since we are debating the deficit, debt and upcominn sequester/tax expiration, lets take a closer look at the history of the American Surplus & Deficits over time.

As you can see, going wildly into the red or black was common in the days before an income tax existed in the 19th century.

The 20th century saw the two world wars and the great depression as sources of spiking deficits relative to GDP.

What occurred over these eras?

The surplus was during the late 1990s when there was an economic boom accompanied with rising taxes.

Surplus/Deficit As A Percentage of total debt after the jump