Key ETF Performance in April and Year to Date

The first four months of the trading year are now behind us, and the "big three" of US market indices (Dow, S&P 500, Nasdaq) are all now up more than 10% year to date.  Below is an updated look at our key ETF matrix, which shows the recent performance of all asset classes.

As shown, the Dow, S&P 500 and Nasdaq 100 all finished up more than 1.85% in April, with the Nasdaq 100 (QQQ) up the most at 2.54%.  Largecaps outperformed midcaps and smallcaps in April, and smallcaps actually finished in the red for the month.  Since the start of the year, midcaps have been the best, however.

We've seen a shift in sector performance over the last week.  As shown, Consumer Staples and Health Care, which had been outperforming significantly, both declined this week, while recent underperformers like Technology, Energy and Materials have bounced the most.  For the year, Utilities -- yes, Utilities -- has posted the biggest gain at +18.64%.

International markets have seen a huge bounce over the last week, with countries like China, Canada, Germany and Russia all gaining more than 4%.  With the exception of Japan, however, the US is still outperforming the rest of the world when looking at year-to-date performance.

Commodities also saw big gains in the last week of April, but aside from natural gas, they were all down for the full month.

Finally, while fixed income ETFs struggled earlier in the year, they have turned it around of late and are all now in the green for 2013.

For those interested, below is a list of the 50 best performing Russell 3,000 stocks year to date.  As shown, Keryx Biopharma (KERX) is up the most at +211.07%.  The next biggest gainer is Coronado Biosciences (CNDO) at 149.45%, followed by SunPower (SPWR), SUPERVALU (SVU) and Astex Pharma (ASTX).  Other notables on the list of this year's big winners include Netflix (NFLX), Best Buy (BBY), Zillow (Z) and Trulia (TRLA).


Buoyed by positive sales results and a more optimistic outlook among restaurant operators, the National Restaurant Association’s Restaurant Performance Index (RPI) rose above 100 in March. The RPI stood at 100.6 in March, up 0.7 percent from February’s level of 99.9. March represented the second time in the last three months that the RPI stood above 100, which signifies expansion in the index of key industry indicators.

“The Restaurant Performance Index gain was driven by stronger same-store sales results in March, with comparisons aided by the Easter holiday occurring during the month,” said Hudson Riehle, senior vice president of the Research and Knowledge Group for the Association. “In addition, restaurant operators are somewhat more confident in the economy and a majority plan to make a capital expenditure in the next six months.”
...
The Current Situation Index stood at 99.8 in March – up 1.5 percent from February’s level. After reporting a same-store sales decline for the first time in 21 months, restaurant operators bounced back in March with a modest net gain. ... While overall sales were positive in March, restaurant operators reported a net decline in customer traffic for the fourth consecutive month. Despite the mixed sales and traffic results, restaurant operators reported an increase in capital spending activity. 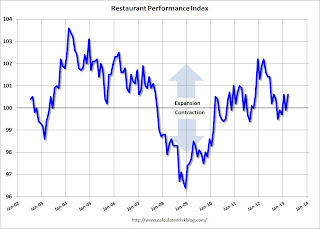 Restaurant spending is discretionary, so even though this is "D-list" data, I like to check it every month.  More evidence of a currently sluggish recovery ...

30. April 2013 Tim Knight _ Top Blogs, Allgemein, Investment / Märkte, Slope of Hope
In the interest of aligning my suggestion with these grotesque market highs, I offer up another bullish idea – - Metro PCS, which is sporting a pretty clean inverted head and shoulders formation.
Kommentar hinterlassen long, Longs, Slope of Hope

30. April 2013 Alex Roslin _ Top Blogs, Allgemein, COTs Timer by Alex Roslin, Investment / Märkte
A couple of signals worth noting based on the latest Commitments of Traders data from the CFTC:

- Bearish for the 30-year Treasury bond (meaning bullish for the yield), taking effect on this week's open. That's because of excessively bullish positioning in bond futures and options by the commercial hedgers and small traders - both of whom I fade.

- Cash for natural gas next week. My signal has been bullish since March 25 and will remain so this week. It goes to cash on next week's open of trading.

Sorry again for the delayed post this week. I was travelling over the weekend from Costa Rica, but I'm back home now just in time for some beautiful Canadian spring weather. Good luck this week.
Kommentar hinterlassen Bond, CFTC, Commitments of Traders, HNU, natural gas, S&P 500, Trading, Treasury, UNG

30. April 2013 Alex Roslin _ Top Blogs, Allgemein, COTs Timer by Alex Roslin, Investment / Märkte
A couple of signals worth noting based on the latest Commitments of Traders data from the CFTC:

- Bearish for the 30-year Treasury bond (meaning bullish for the yield), taking effect on this week's open. That's because of excessively bullish positioning in bond futures and options by the commercial hedgers and small traders - both of whom I fade.

- Cash for natural gas next week. My signal has been bullish since March 25 and will remain so this week. It goes to cash on next week's open of trading.

Sorry again for the delayed post this week. I was travelling over the weekend from Costa Rica, but I'm back home now just in time for some beautiful Canadian spring weather. Good luck this week.
Kommentar hinterlassen Bond, CFTC, Commitments of Traders, HNU, natural gas, S&P 500, Trading, Treasury, UNG

What are you reading?

U.S. Companies Are Back on Top O'Brien Homes started holding a monthly housing lottery for its 228-unit development called Fusion in Sunnyvale, Calf., after seeing throngs of prospective buyers camp out at the openings of other new condo complexes in the area.

Each month, as new sections of the development came under construction, roughly 50 buyers would show up at O'Brien Homes' sales office hoping to be picked for one of the 10 or so sites available. The participants were already pre-qualified for a mortgage and had their down payment in place. After being assigned a number, they crossed their fingers and waited for each bingo ball to be plucked from the tumbler.

"Some people would come back month after month," said Frimel. "It got very frustrating for them."

Even with the price hikes, buyers kept returning. O'Brien started issuing returnees an extra bingo ball. If they lost for four straight months, they would get five chances the next time.

Here's my Greenspan imitation: "Don't worry, it's only some sections of the country. Besides it's well supported by the fundamentals. And as we all know, home prices never drop."

Why Do We Use Core Inflation?

Blogging is a bit like teaching the same class year after year; inevitably there are moments when you feel exasperated at the class’s failure to grasp some point you know you explained at length — then you realize that this was last year or the year before, and it was to a different group of people.

So, I gather that the old core inflation bugaboo is rearing its head again — the complaint that it’s somehow stupid, dishonest, or worse to measure inflation without food and energy prices, often coupled with the claim that the statistics are being manipulated anyway. So, time for a refresher. ...

Why Do We Use Core Inflation?: There is a lot of confusion over the Fed's use of core inflation as part of its policy making process. One reason for confusion is that we using a single measure to summarize three different definitions of the term "core inflation" based upon how it is used.

Let me emphasize one thing. If the question is "what is today's inflation rate," the total inflation rate is the best measure. It's intended to measure the cost of living and there's no reason at all to strip anything out. It's only when we ask different questions that different measures are used.

Third, and this is the function that is ignored most often in discussions of core inflation, but to me it is the most important of the three. The inflation target that best stabilizes the economy (i.e. best reduces the variation in output and employment) is a version of core inflation.

In theoretical models used to study monetary policy, the procedure for setting the policy rule is to find the monetary policy rule that maximizes household welfare (by minimizing variation in variables such as output, consumption, and employment). The rule will vary by model, but it usually involves a measure of output and a measure of prices, and those measures can be in levels, rates of change, or both depending upon the particular model being examined.

In general, a Taylor rule type framework comes out of this process ( i.e. a rule that links the federal funds rate to measures of output and prices). However, in the policy rule, the best measure of prices is usually something that looks like a core measure of inflation. Essentially, when prices are sticky, which is the most common assumption driving the interaction between policy and movements in real variables in these models, it's best to target an index that gives most of the weight to the stickiest prices (here's an explanation as to why from a post that echoes the themes here).  That is, volatile prices such as food and energy are essentially tossed out of the index used in the policy rule.

The indexes that come out of this type of theoretical exercise often includes both output and input prices, and occasionally asset prices as well. That is, a core measure of inflation composed of just output prices isn't the best thing for policymakers to target, a more general core inflation rate combining both input and output prices works better. ...

Finally, there is also a question of what we mean by inflation conceptually. Does a change in relative prices, e.g. from a large increase in energy costs, that raises the cost of living substantially count as inflation, or do we require the changes to be common across all prices as would occur when the money supply is increased? Which is better for measuring the cost of living? Which is a better target for stabilizing the economy? The answers may not be the same. For a nice discussion of this topic, see this speech given yesterday by Dennis Lockhart, President of the Atlanta Fed:

Inflation Beyond the Headlines, by Dennis P. Lockhart, President, Federal Reserve Bank of Atlanta: ...Let me begin by posing the simple question: What do we mean by "inflation"? The answer to that simple question isn't as simple as it may seem.

The popular treatment of inflation in our sound bite society risks confusing inflation with relative price movements and the cost of living. By cost of living, I'm referring to the costs you and I incur to maintain our level of consumption of various goods and services including essential items such as food, gasoline, and lodging.

And I think I'll end with this part of his remarks:

Attempts to measure the aggregate rate of price change—no matter how sophisticated—remain imperfect. As a result, when it comes to measuring inflation, judgment is needed to distinguish persistent price movements that underlie overall inflation from the relative price adjustments. Separating the inflation signal from noise involves much uncertainty—especially when making decisions in real time. Discerning accurately the underlying trend is difficult. It is essential for those of us who have responsibility for responding to these trends to use a wide variety of core measures and inflation projections to make the most informed judgment we can.

LinkedIn: The Stock that Downticks Forgot


Value indicators are hard to time, but shouldn’t be ignored

I often write about market valuation metrics, from CAPE to Q, and the conclusion is always the same: they’re all really bad to use as timing factors.

The post Value indicators are hard to time, but shouldn’t be ignored appeared first on The Hard Trade.