The S&P 500 finished the month of May up more than 2%, but Wall Street was anything but bullish as we closed out the month today.  So where do we go from here?  Please take part in our weekly market poll by letting us know whether you think the S&P 500 will be higher or lower one month from now.  We'll report back with the results on Monday before the open.  Thanks for participating and have a great weekend!  If you're wondering what to make of today's sell-off, be sure to check out our just published Bespoke Report newsletter.  This weekend is the last time to take advantage of our 10% discount on all membership types!

31. Mai 2013 By Paul Krugman Allgemein, Ökonomie, Paul Krugman
As pure and simple as it gets.
Kommentar hinterlassen Uncategorized

An Ugly Close to May

Since its highs for the month last week, the S&P 500 has now pulled back nearly 3.5%.  As shown in the chart below, it has not been a pretty few days of trading.  After peaking on the morning of the 22nd, the index has now made two lower highs on an intraday basis, and just in the last several minutes of trading on Friday, it broke below support from the short-term breakout in the middle of the month.  While the last few days have not been great for equity bulls, the S&P 500 did still manage a gain of more than 2% in May, making it seven straight months of gains.

You Are About to Become Obsolete; Perhaps You Already Are (But You Don’t Realize It Yet)

The author, Federico Pistono, periodically writes a new chapter and I just signed up for updates.

The introduction caught my eye.

You are about to become obsolete. You think you are special, unique, and that whatever it is that you are doing is impossible to replace. You are wrong. As we speak, millions of algorithms created by computer scientists are frantically running on servers all over the world, with one sole purpose: do whatever humans can do, but better. These algorithms are intelligent computer programs, permeating the substrate of our society. They make financial decisions, they predict the weather, they predict which countries will wage war next. Soon, there will be little left for us to do: machines will take over.

Does that sound like some futuristic fantasy? Perhaps. This argument is proposed by a growing yet still fringe community of thinkers, scientists, and academics, who see the advancement of technology as a disruptive force, which will soon transform our entire socioeconomic system forever. According to them, the displacement of labour by machines and computer intelligence will increase dramatically over the next few decades. Such changes will be so drastic and quick that the market will not be able to abide in creating new opportunities for workers who have lost their jobs, making unemployment not just part of a cycle, but structural in nature and chronically irreversible. It will be the end of work as we know it.

Most economists discard such arguments. Many of them don’t even address the issue in the first place. And those who do address this issue claim that the market always finds a way. As machines replace old jobs, new jobs are created. Thanks to the ingenuity of the human mind and the need for growth, markets always find a way, especially in the ever-connected and globalised mass market we live in today.

In this book I will try to avoid picking either side based on belief, gut feeling, or hunch. Rather, I will attempt to engage in informed logical reasoning, based on the evidence we have so far.

The book is divided into three parts. First, we will explore the topic of technological unemployment and its impact on work and society – I chose to focus on the US economy, but the same argument applies to most the industrialised world. In the second part we will look into the nature of work itself and the relationship between work and happiness. The last part is a bold attempt to provide some practical suggestions on how to deal with the issues presented in the first two parts. Doing a thorough examination of each section would require a monumental effort, possibly resulting in thousands of pages, far exceeding the purpose of this book. My intention is not to write a complete academic report, but rather to initiate a discussion about what I think will soon be one of the biggest challenges that we have to face as a society and as individuals. Too often we treat various issues as separate subjects, not realising the interconnected nature of our reality. This mistake has made us weak and vulnerable. Over the last 70 years, we have set the stage of our own demise. We have become increasingly discontent, the quality of our relationships have diminished, and we have lost track of what really matters. Today, as the comedian Louis CK has noted: “Everything is amazing, and nobody is happy!” It is time to take a step back and think about where we are going.

Part I is on Automation and Unemployment, and consists of five chapters. Parts II and III are not yet posted. Inquiring minds may wish to follow the journey.

Here is a 17 minute video that is also worth a look. Pistono argues "no one is safe" while asking "what happens if Walmart fully automates?"

Here is my favorite snip from the video: "As much as 80% of the people hate their job. That's four out of five spending most of their useful life doing something they don't particularly enjoy. We are in kind of a work paradox because we work long and hard hours, on jobs we hate, to buy things we don't need, to impress people we don't like. Genius!"

For several years I have been writing about the concept of "Structurally High Unemployment" but Pistono goes far beyond that. He explores the idea this is not just another creative destruction phase that will be followed by another job boom, but rather this is the end, computer intelligence is why, and that's a great thing!

Pistono's socialistic vision of the future is that robots will do everything, there are infinite resources, no one has to work, and we all live happily ever after.

To say I disagree about that Pollyanna endgame is putting things mildly. And since I believe there is no work-free nirvana, here's the key question: what if Pistono is half-right, that no job is safe, that no jobs are coming, but robots do not provide the "But that's OK" nirvana Pistono imagines.


Driven by higher same-store sales and an improving outlook among restaurant operators, the National Restaurant Association’s Restaurant Performance Index (RPI) hit a 10-month high in April. The RPI – a monthly composite index that tracks the health of and outlook for the U.S. restaurant industry – stood at 101.0 in April, up 0.4 percent from a level of 100.6 in March. In addition, April represented the third time in the last four months that the RPI topped the 100 level, which signifies expansion in the index of key industry indicators.

“Growth in the Restaurant Performance Index was due largely to restaurant operators’ healthier outlook for the business environment in the coming months,” said Hudson Riehle, senior vice president of the Research and Knowledge Group for the Association. “In particular, there was a dropoff in the proportion of operators who expect conditions to worsen in the months ahead, which suggests a broadening of the perspective that the expansion is firmly entrenched.”
...
The Current Situation Index, which measures current trends in four industry indicators (same-store sales, traffic, labor and capital expenditures), stood at 100.1 in April – up 0.3 percent from a level of 99.8 in March. April represented the first time in eight months that the Current Situation Index rose above 100, which signifies expansion in the current situation indicators. 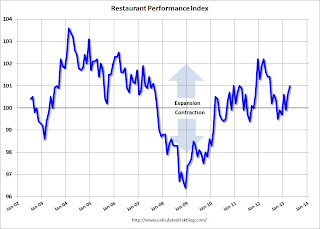 Restaurant spending is discretionary, so even though this is "D-list" data, I like to check it every month.

Crude oil inventories saw a significant build this week, even as traders were expecting a decline of 750K.  With an increase of 3 million barrels, crude oil inventories are now once again higher than they have been at any other time since 1983, and you could drive a truck through a gap between actual stockpiles and the average for this time of year.

While crude oil inventories are higher than they have ever been, gasoline stockpiles are much closer to average for this time of year, and even more so after this week's decline in inventories.  For the latest week, traders were expecting a decline of 650K barrels, while the actual decline came in at more than twice that (-1,514).

31. Mai 2013 Tim Knight _ Top Blogs, Allgemein, Investment / Märkte, Slope of Hope
I guess I’ve got a thing for South American shorts right now – - I did a post earlier today about GGB, and now I’d like to feature GFA, shown below. This thing has already been beaten down from the 20s to $3 and change, but I think it’s going lower still.
Kommentar hinterlassen Foreign, red, short, shorts, Slope of Hope
1 2 3 … 185 »