The S&P 500 finished January down nearly 4%, and investors ended the month on a selling spree, pushing stocks well into the red at the close on Friday.  So which way will the market head from here?  Please take part in our weekly Bespoke Market Poll below by letting us know whether you think the S&P 500 will be higher or lower one month from now.  We'll report back with the results on Monday before the open.  Thanks for participating and have a great weekend!

If you're looking for more analysis and commentary on where we think this market is headed, be sure to sign up for a 5-day free trial to any of our subscription services and check out our just-published Bespoke Report newsletter.  You won't be disappointed!

Looking for actionable market commentary?  Sign up for a 5-day free trial to Bespoke Premium today!

Schiff vs. Ritholtz: Political Correctness vs. Law of Supply and Demand

Jon Stewart's Daily Show mocked Schiff in an amusing video interview Wage Against the Machine. The video allegedly explores "the devastating economic effects of raising the minimum wage to the poverty level."

Schiff's opponent in the interview was Barry Ritholtz at the Big Picture blog. Before the show aired, Barry explained How I Ended Up On The Daily Show.

The feedback against Schiff was enormous. Ritholtz has the details in Follow Up: Daily Show Blowback.

I am no fan of Schiff. We have radically different views on the inflation-deflation debate. And I do find the way he stated his case to be very distasteful.

That said, it's clear the Daily Show was out to score political points, not explore economic reality.

Given that Schiff was purposely displayed in the worst light possible and Ritholtz the best light possible (Ritholtz admits retake after retake) it is not shocking in the least to see all this blowback.

Merits of the Debate

Political correctness or not, I want a sound discussion of economic principles.

In a Shades of France Socialistic Proposal (my title), Ritholtz states "The most radical idea is bit of pure fantasy: Guarantee every person in America a minimum salary".

Indeed, let's hope that remains a fantasy because it's already proven if you give things away free, people able to work, will stop working.

Here's an important corollary: If you make people work, you end up with work that has no economic justification.

Campaign for a Bigger Paycheck

On January 2, a New York Times editorial, Campaign for a Bigger Paycheck,  stated 'When you raise the price of employment, guess what happens? You get less of it,' said Speaker John Boehner, espousing a party-line theory that most economists agree has been discredited.

Actually, it's the New York Times editorial board that's discredited.

Caroline Baum, in one of her last articles at Bloomberg (she has gone on to other things and I wish her well), blasted that New York Times "discredited" fiction sky high.

Here is the pertinent snip from Someone Please Help New York Times With Econ 101.

This is one of the more outrageous political statements dressed up as economic theory from the editorial board of the New York Times. They should be ashamed of themselves.

If you learned anything from your Econ 101 class in college, hopefully it was the law of supply and demand. Lowering/raising the price of a good or service increases/decreases the quantity demanded. Similarly, producing less/more of something will raise/lower the price.

Isn't it about time opinion writers stopped using economics to justify a moral issue? Our hearts go out to those who can't earn a decent living, find a job, get laid off for no good reason or find themselves in harm's way. If we, as a society, want to provide support to those in need, fine. But the paper of record does a disservice when it makes wild, unsubstantiated claims about basic principles of economics.

Let's now look at the economic law of supply and demand in practice as opposed to a biased political correctness in the way things were stated.

Here is a chart from the Institute for Research on Labor and Employment by UC Berkeley. 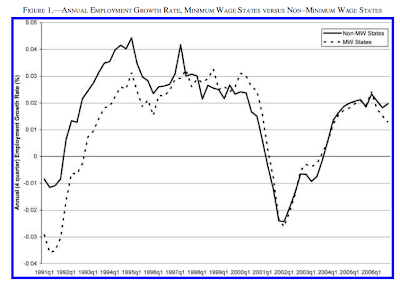 I am sure you can find studies that allegedly prove or disprove anything, but things change over time and wages tend to go up over time so there is an inherent bias towards believing myths.

Europe and Excellent Backdrop for Discussion

Europe provides an even better look at the debate because of wide country-to-country variances.

Yesterday, in the wake of Tuesday’s State of the Union address, I poured cold water on President Obama’s claim that a hike in the minimum wage for federal contract workers would benefit the United States’ economy, pointing specifically to unemployment rates in the European Union. The data never lie: EU countries with minimum wage laws suffer higher rates of unemployment than those that do not mandate minimum wages. This point is even more pronounced when we look at rates of unemployment among the EU’s youth – defined as those younger than 25 years of age. 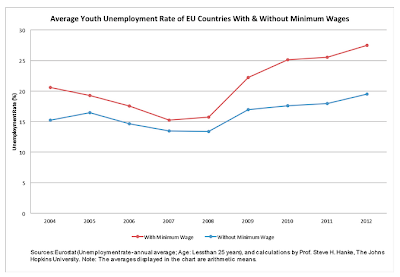 In the twenty-one EU countries where there are minimum wage laws, 27.7% of the youth demographic – more than one in four young adults – was unemployed in 2012. This is considerably higher than the youth unemployment rate in the seven EU countries without minimum wage laws – 19.5% in 2012 – a gap that has only widened since the Lehman Brothers collapse in 2008.

Comedy is Comedy, Reality is Reality

Hanke concluded with a piece of wisdom from Nobelist Milton Friedman: "the minimum wage law is most properly described as a law saying employers must discriminate against people who have low skills. That’s what the law says."

I conclude with: Let's judge an argument based on merits, not on bias against the person stating it.

1. Fed tapers another $10B, signaling confidence that the economy can stand on its own.
2. Ford had one of its best years ever (does this mean American Manufacturing is back?). Will bonus an average $8,800 to its 47,000 union workers, a record.
3. Q4 GDP came in at 3.2%, in line with expectations.
4. Japan inflation rose at its fastest pace in 5 years & the job market improved, score one for Abe.
5. Personal consumption growth came in at an annualized rate of 3.3% in Q4, up from 2% in Q3.
6. Euro-area economic confidence increased for the ninth straight month.
7. Consumer confidence rose to 80.7, well ahead of expectations.
8. U.S. flash PMI rose to 56.6 in January, up from 55.7 in December (highest # since September).
9. U.S. home prices rose 13.7% in November from a year earlier.

1. Pending home sales cratered 8.7% m/o/m, biggest miss in over 3 years and worst numbers since May 2010.
2. The major indices had their first red month since August. If the January barometer is as accurate as most other indicators….
3. Durable goods dropped by 4.3% vs an expected 1.8% rise, ugly miss.
4. Core capex fell 1.3% vs an expected 0.3% rise.
5. New home sales tumbled 7.1% m/o/m in December, way worse than the expected 1.9% fall.
6. The Nikkei had a rough week, sinking to lowest levels since November.
7. HSBC China PMI fell to a 6-month low.
8. Weekly jobless claims rose more to the highest level in a month.
9. There was an awful lot of weather blaming, as winter came out of nowhere.
10. University of Michigan consumer confidence fell to 81.2, down from 82.5 in December.
11. European stocks had their worst January since 2010.
12. Personal income unchanged, again.
13. U.S. home prices fell in November, the first decline in a year.

As Goes January – Drink Up!

I Am Not A Wise Man 31. Januar 2014 Mike Mish Shedlock Allgemein, Mish's Global Economic Trend Analysis, Ökonomie
I am pleased to report some good news today:  UKIP takes lead in British polls ahead of EU parliamentary elections to be held in May. 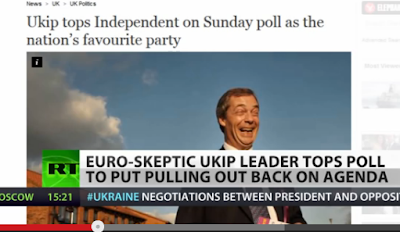 Inquiring minds should watch an interesting Video Interview of UKIP leader Nighel Farage. Here's the opening lead "The UK Independence Party has managed to win over the hearts of the British public."

‘The UK Independence Party is the nation’s favourite political party, a poll for The Independent on Sunday reveals today.

Voters regard Nigel Farage’s party more favourably than Labour, the Conservatives or the Liberal Democrats. The surprising finding will underline concerns inside the mainstream Westminster parties that Ukip is on course to come first in May’s European elections and could deny Labour or the Tories an outright victory in next year’s general election.

What is more, Mr Farage is favoured over Ed Miliband and Nick Clegg as a party leader, beaten only by David Cameron, the ComRes survey reveals. Ukip is the favourite choice of 27 per cent of voters, while Labour is favoured by 26 per cent. The Conservatives are next, on 25 per cent, and the Lib Dems last, on 14 per cent. Although the differences in the first three parties are within the margin of error, the findings will fuel unease inside Downing Street that the Prime Minister has failed to close down the question of Europe and that Ukip’s support remains strong.

This shift in voter sentiment is a clear message to prime minister David Cameron: Get your head out from where the sun doesn't shine and announce a referendum on EU membership this year.

The Good, The Bad, And The Ugly

I have a mixed perspective on the situation in equities right now. It’s impossible to predict the direction of the resolution of the current impasse but it’s clear to me that it will be explosive. At this point I do not see any conclusive evidence that signals a low is likely to be in place. In other words, if the bears can muster up the mojo there is still downside potential left on the books. Of course that does not rule out a bounce – so to make sense of it all let’s look at three key charts which I present as the good, the bad, and the ugly. The good: Clearly we have established and thus far held support on both the daily and the weekly. On the former it’s the 100-day SMA and on the weekly it’s a NLBL at 1765.5. Unfortunately for the bulls it expires today and that may make it easier for the bears to slip by it – granted the five period expiration is arbitrary but let’s agree that this support line is getting long in the tooth. It also has only been touched once which lowers its significance. In any case – the bears have not taken us below 1760 and that is the good news. The bad:  VIX volatility – i.e. volatility of volatility – is expanding. The bulls had the opportunity to produce a VIX buy signal (relative to equities) on Wednesday but slipped on a banana peel. This keeps expanding the BB and that will make it harder for such a signal to materialize. So it could get uglier here before it gets better. The ugly: Since this morning we’ve been pushing up – tepidly but if you’re long you take it right? Well, at the same time buying volume seems to be below or at best on par with selling. So I don’t sense any real mojo here. It’s Friday and a lot can happen over the weekend but in the end this is starting to ‘feel’ (forgive me for using that word) just like the gyrations we endured near the top. The bulls have not shown us any gusto for being long and there may be consequences on the horizon. Because if it slides below ES 1760 it’ll most likely fall off the plate. Be prepared!

More charts and commentary below for anyone donning a secret decoder ring. If you are interested in becoming a Gold member then don't waste time and sign up here. And if you are a Zero subscriber you get free access to all Gold posts, which gives you double the bang for your buck!
Please login or subscribe here to see the remainder of this post.

The post The Good, The Bad, And The Ugly appeared first on The Evil Speculator.