31. März 2015 TraderHR _ Top Blogs, Allgemein, Investment / Märkte, Slope of Hope
After more than 5 weeks of consolidation, Apple Inc. (AAPL) looks like it may start another move toward new highs into the 135-150 range. Helped by a strong bounce in the overall market, AAPL already broke the 20-day moving average Monday and is moving toward the descending trend line at around 128.  If broken, this is likely to confirm […]
Kommentar hinterlassen AAPL, long, Longs, Slope of Hope

31. März 2015 Bill McBride Allgemein, Calculated Risk, Ökonomie
Fannie Mae reported today that the Single-Family Serious Delinquency rate declined slightly in February to 1.83% from 1.86% in January. The serious delinquency rate is down from 2.27% in February 2014, and this is the lowest level since September 2008.

The Fannie Mae serious delinquency rate peaked in February 2010 at 5.59%.

Note: These are mortgage loans that are "three monthly payments or more past due or in foreclosure". 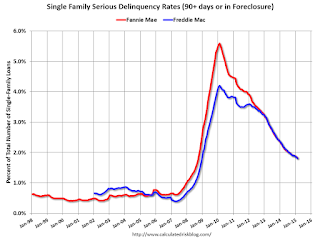 Note to Self: is the state’s failure to expand Medicaid and failure to aggressively inform citizens about the availability of exchange subsidies going to push Texas into recession this year?

Downside Data Surprises in Canada; Bad Weather Up North? How About Recession?

31. März 2015 Mike Mish Shedlock Allgemein, Mish's Global Economic Trend Analysis, Ökonomie
The string of bad data reports not only applies to the US, economists up North appear to be no better at predicting the weather than US economists.

For the past 6 months, we have been alerting clients to the persistent decline in our Canada leading indicator. This is now showing up in numerous Canadian coincident data releases, with retail sales being the latest to miss expectations last Friday.  The economic surprise index is now declining sharply and there is little sign of immediate improvement ahead. 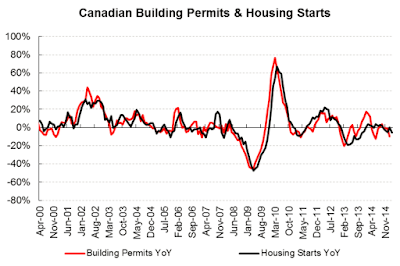 PMIs continue to fall whilst building permits and housing starts (some of the best leading indicators to watch), remain negative yoy (top chart). However one of our main themes this year has been that of cognitive dissonance, whereby growth disappoints, but higher excess liquidity supports asset prices.

Retail sales in Canada in December posted their largest one-month drop since April 2010, as the cost to fill your gas tank plunged and holiday shoppers spent less.

Statistics Canada said Friday retail sales fell 2.0 per cent compared with November to $42.1 billion in December. That compared with a drop of 0.4 per cent that economists had expected, according to Thomson Reuters.

Despite the larger than-expected drop in sales, Bank of Montreal senior economist Benjamin Reitzes cautioned not to jump to conclusions based on the retail sales report. Reitzes noted the rise in popularity of Black Friday sales in Canada has pulled some holiday shopping into November.

Sales were down in nine of 11 subsectors, representing 71 per cent of retail trade.

On March 20, the Statistics Canada Retail Trade, January 2015 report showed sales down for a second month.

Retail sales decreased for the second consecutive month in January, declining 1.7% to $41.4 billion. Sales were lower in 7 of 11 subsectors, representing 83% of retail trade. 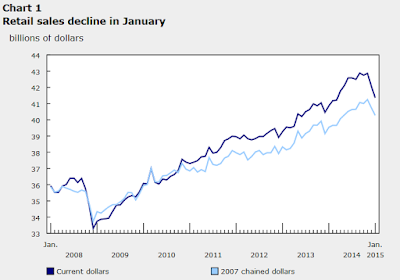 Gasoline Station Sales Down Seven Months in a Row

Sales at gasoline stations fell 8.8% in January, reflecting lower prices at the pump. This was the seventh straight monthly decrease and the largest monthly decline since November 2008.

Sales Down in Nine Provinces

Retail sales were down in nine provinces in January. Lower sales in Quebec, Ontario and Alberta accounted for most of the decrease.

Quebec (-2.4%) reported the largest decrease in dollar terms, with widespread declines across most store types.

The decline in Ontario (-1.4%) was mainly attributable to lower sales at gasoline stations.

Retail sales in Alberta (-2.8%) declined for the fourth consecutive month in January, reaching their lowest level since December 2013. The decline was largely a result of lower sales at gasoline stations and new car dealers.

Receipts in Nova Scotia fell to their lowest level since March 2013, decreasing for the sixth consecutive month.

Prince Edward Island (+0.5%) was the only province to register an increase in January.

Hey wait a second. Didn't economists tell us consumers would take savings on gasoline and spend it elsewhere?

Yes they did. So there is only one possible explanation: Just as in the US, Canadian weather was much worse than economists initially thought.

Retail sales fell 1.7 per cent in January, StatsCan reported, the second consecutive monthly decline. Analysts had been expecting a slowdown due to lower gas prices, but they weren’t expecting the broad-based declines that were actually seen: Seven of 11 retail sectors shrank in January, including autos, furniture and food and beverages.

Economists had been expecting that lower gas prices would mean Canadians would spend more on other things, but that doesn't seem to be happening.

"The latest figures suggest that households are becoming more cautious in their spending habits," Grantham wrote, adding he doesn't think Canada will meet the modest 1.5-per-cent growth rate that the Bank of Canada is predicting for the first quarter of the year.

Consumers are showing signs of exhaustion, with household debt levels reaching yet another record high in the last months of 2014, up to 163.3 per cent of disposable income.

I saw no other person mention the inversion at the time. An inverted yield curve generally portends recession.

Nine days later, the Canadian yield curve is still inverted. Let's compare what I posted about the curve on January 21 vs. January 30.


Not only did yields plunge across the board since then, the yield curve is still inverted all the way out to three years.

There is no point in waiting for further data. The Canadian recession has already arrived.


The Canadian yield curve is still inverted albeit very slightly. Instead of attempting to predict the weather, something that is very difficult for economists to do (even in arrears!), perhaps they should watch the yield curve.

Isn't that what they should be doing?

For more on weather predicting in the US, please see Economists Fail to Predict Weather Once Again: Chicago PMI Disappoints.

Despite dampened sales and customer traffic levels as a result of extreme weather in parts of the country, the National Restaurant Association’s Restaurant Performance Index (RPI) held relatively steady in February. The RPI stood at 102.6 in February, down slightly from a level of 102.7 in January.

In addition, February marked the 24th consecutive month in which the RPI stood above 100, which signifies expansion in the index of key industry indicators.

“With same-store sales and customer traffic levels being impacted by challenging weather conditions in parts of the country, the Current Situation component of the RPI declined in February,” said Hudson Riehle, senior vice president of the Research and Knowledge Group for the Association. “However, this was offset by a solid improvement in the Expectations component of the index, as restaurant operators are increasingly optimistic about business conditions in the months ahead. As a result, the overall RPI held relatively steady in February.”
emphasis added 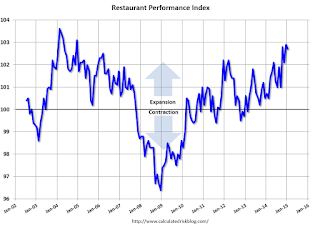 Restaurant spending is discretionary, so even though this is "D-list" data, I like to check it every month. This is another solid reading - and it is likely restaurants are benefiting from lower gasoline prices and are having to raise wages - a little - to attract and retain workers.

Afternoon Must-Read: Umberto Eco: How to Write a Thesis: "You must overcome any shyness and have a conversation with the librarian...

...because he can offer you reliable advice that will save you much time. You must consider that the librarian (if not overworked or neurotic) is happy when he can demonstrate two things: the quality of his memory and erudition and the richness of his library, especially if it is small. The more isolated and disregarded the library, the more the librarian is consumed with sorrow for its underestimation. A person who asks for help makes the librarian happy..."

...We also test for heterogeneous treatment effects using the distribution of estimated ranks, which has a known form. We propose a cross-validation based procedure for model selection. Using 29 cases of state minimum wage increases between 1979 and 2013, we find a sizable, positive and statistically significant effect on the average teen wage. We do detect heterogeneity in the wage elasticities, consistent with differential bites in the policy. In contrast, the employment estimates suggest a small constant effect not distinguishable from zero.