Yesterday, the BEA reported that investment in non-residential structures decreased at a 23.1% annual rate in Q1.

All of the decline could be attributed to less petroleum exploration and less investment in electrical. Both declined at a 50% annual rate in Q1.

There was some weakness in lodging investment, but that might be weather related. Excluding petroleum and electrical, non-residential investment in structures was unchanged in Q1. 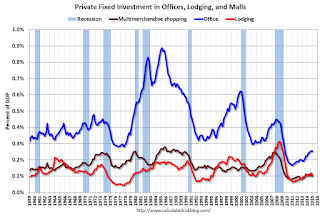 The first graph shows investment in offices, malls and lodging as a percent of GDP. Office, mall and lodging investment has increased a little recently, but from a very low level.

Investment in offices increased slightly in Q1, is down about 43% from the recent peak (as a percent of GDP) and increasing from a very low level - and is still below the lows for previous recessions (as percent of GDP).  With the high office vacancy rate, office investment will only increase slowly.

Investment in multimerchandise shopping structures (malls) peaked in 2007 and is down about 59% from the peak.   The vacancy rate for malls is still very high, so investment will probably stay low for some time. 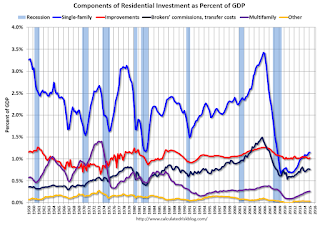 The second graph is for Residential investment components as a percent of GDP. According to the Bureau of Economic Analysis, RI includes new single family structures, multifamily structures, home improvement, Brokers’ commissions and other ownership transfer costs, and a few minor categories (dormitories, manufactured homes).

Investment in home improvement was at a $182 billion Seasonally Adjusted Annual Rate (SAAR) in Q1 (just over 1.0% of GDP).

These graphs show investment is generally increasing, but from a very low level.

Do You Want to Know a Secret?

30. April 2015 Tim Knight _ Top Blogs, Allgemein, Investment / Märkte, Slope of Hope
I hate tech bubbles. No, that’s not the secret. Everyone knows that. The secret I am referring to is a company named, literally, Secret. And the existence of this company, as well as the easy $6 million its co-founders pocketed when they shuttered the place, is absolutely symptomatic of this bubble-of-bubbles we are living in […]
Kommentar hinterlassen Analogs, Best-of-Slope, blue, Slope of Hope, Snark

Romer on Growth Theory and ‚Work That is Scientifically Unjustifiable‘

A small part of a much longer interview of Paul Romer (focused largely on charter cities):

... Q: So are you not going back to work on growth theory?

Romer: Actually I am writing something about growth theory right now, but it is mostly a commentary on what happened to growth theory. To be honest, I think that a substantial fraction of the work that people are now doing on growth has to be judged a failure from a scientific perspective.

In particular – and I apologize if this relies too much on the jargon of our field — monopolistic competition turns out to be just the tool for understanding the economic ideas. (It also turns out to be the tool for understanding international trade, economic geography, and macroeconomics.) But there has been a series of models that are associated with the University of Chicago – from what some people call the freshwater camp in macroeconomics – that are continuing a fight that George Stigler started in the 1930s to keep monopolistic competition from being used in economics. It is hard to explain to an outsider why a whole group of economists have ended up on the wrong side of scientific progress, resisting the direction that all of modern economic theory is taking, but they are.

In the economics of ideas, we have to be willing to at least consider the possibility that someone could have some control over an idea, hence some monopoly power associated with ideas. This could come from patent or a copyright. It could also come from secrecy.

Then we can ask if it is a good idea or a bad idea to have more intellectual property rights or more protection of ownership of ideas. We know that the answer here is mixed. Sometimes some amount of it can be good, but it can also be harmful if the property rights are too strong or are given to the wrong types of ideas. But if you don’t even allow for the possibility of ex post monopoly rents from the discovery of ideas, you can’t even ask the question.

So it is scientifically unacceptable to have people who say, “We will never, as a matter of principle, consider a model in which there are ever any monopolies. We will dogmatically stick only to models of price-taking competition.” I think this an untenable scientific stance.

I don’t think that this critique is going to reignite interest in growth theory. But like I said, when it’s time for interest to come back, somebody have a new take on growth theory, and work in this area will start again. But in the meantime, we have to stop tolerating work that is scientifically unjustifiable. ...

Map of US Oil Pipelines 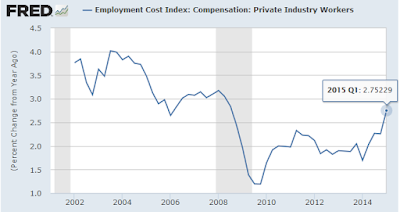 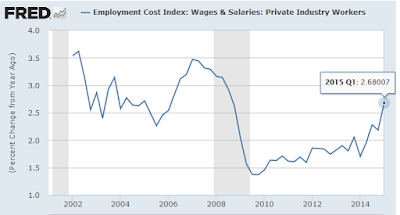 Employment costs have risen. Expect an even bigger jump in upcoming months now that Walmart and McDonald's voluntarily hiked wages, and some cities and states raised the minimum wage as well.

Extra money in people's pockets is a good thing, but it will hurt corporate earnings and dampen enthusiasm for hiring and adding stores.

The tape across the board has been running like a hare and today’s session again did not offer us any reprieve from the relentless battering we’ve been through over the past few weeks. Up and down she goes although on the equities side it’s been more down than up and the fat lady hasn’t sung just yet. Clearly I’m going to be limping behind here as things are unfolding quite rapidly. When I took that snapshot it was looking like equities may have found some ground but I simply didn’t trust it and posted in the comment section that it’s probably best to let things play out. That seems to have been good advice as the spoos are heading even lower as I’m typing this. To your collective benefit Mole’s instincts have been honed by decades of hairy tape The Zero is still showing us very little participation, once again indicative of a stop run by institutional traders. A lot of greedy retail rats are being burned here folks – consider yourself lucky you’re not one of them (I hope!). The NQ printing lower highs and lower lows – this is not looking good. The 25-day SMA only offering soft support and this thing could easily resolve toward the 100-day SMA near 4317 before it’s all over. On days like these it always pays to check breadth and momo charts. The VIX:VXO is showing me no divergence which is concerning. Alright, updated across the board in no particular order: The EUR/USD is now in earshot of my target and I’m taking everything but 25% of my position off the table. This campaign has done a great job of softening the impact of the shitty exchange rate I’ll probably be facing in the months ahead. Notice the weekly NLBL that has been sliced today. EUR/JPY – same idea here – I’m taking almost everything off the table, only keeping 25% of my original position. Again my target is near the 100-day SMA where I would normally expect some obligatory resistance. But given the velocity of this short squeeze things could easily overshoot. Crude – I’m quite stunned by how well this one has kept up given all the drama in the remaining futures pits. As you may remember I snagged a rather early seat near the 50 mark and remain determined to ride this puppy higher. Over the past week or so there was a lot of talk about crude having hit a high and I’m glad I didn’t listen – as always! ZF is not a setup yet but I like the daily and weekly panels here. As soon as it gives me an excuse to be long I’ll let you know. Ditto on the 10-year futures but it’s a bit early to snag a position just yet. Let’s see how things play out Sunday night or on Monday.

Alright before I grab dinner a few juicy setups for my intrepid subs:

More charts and commentary below for anyone donning a secret decoder ring. If you are interested in becoming a Gold member then don't waste time and sign up here. And if you are a Zero subscriber you get free access to all Gold posts, which gives you double the bang for your buck!
Please login or subscribe here to see the remainder of this post.

For these seven builders, net orders were up 19.9% year-over-year.  Although cancellations are handled differently, this is about the same year-over-year increase for Q1 as for New Home sales as reported by the Census Bureau.

The average closing price is only up slightly this year following a sharp increase in 2014.

Net orders per active community for the seven builders combined were up 13.5% YOY, while their combined order backlog at the end of March was up 13.8% YOY.

A Touch of Ray

Let Me Strongly Agree with Ben Bernanke on the Wall Street Journal Editorial Page: It Is and Has Long Been a Clown Show

Over at Equitable Growth:

...[They say that because] the FOMC's projections of economic growth have been too high... monetary policy is not working and efforts to use it to support the recovery should be discontinued. It's generous of the WSJ writers to note... that 'economic forecasting isn't easy.' They should know, since the Journal has been forecasting a breakout in inflation and a collapse in the dollar at least since 2006, when the FOMC decided not to raise the federal funds rate above 5-1/4 percent.... READ MOAR

They fail to note that, while the FOMC (and virtually all private-sector economists) have been too optimistic about growth... growth in output has been slow... because productivity gains have been slow.... But nobody claims that monetary policy can do much about productivity growth.... The Fed's aggressive actions are an important reason that job creation in the United States has outstripped that of other industrial countries by a wide margin.

What is there to say other than to agree?

That eight years of being not just wrong but completely and totally wrong about the macroeconomic situation have provoked precisely zero rethinking of any issues by Paul Gigot and company is... not unexpected.

These are the people, after all, who claimed that the Clinton tax increase of 1993 would lead to a deep and long economic depression.

These are the people, after all, who claimed that the Reagan tax cut of 1981 would reverse the productivity slowdown of the 1970s and restore the growth rates of the 1950s and 1960s.

The point of the Wall Street Journal editorial page is to pander to the prejudices of its core readers. It is not as malevolent and destructive as Fox News, which takes its mission to be to scare its core readers so that they keep their eyeballs glued to the screen so that those eyeballs can be sold to advertisers. But its mission of reinforcing evidence-free right-wing epistemic closure against any incursion of empirical reality is a malevolent and destructive one.