How I spent my day 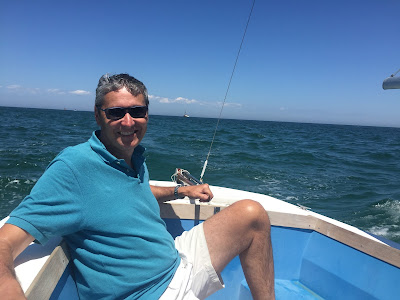 
I supposed people could transfer cash from elsewhere into stocks but no one in their right mind would do such a thing.

And what about taking cash out of brokerage accounts, wiring it elsewhere? The article did not say, but I suspect that has capital restrictions as well.

Will the market really reopen Monday?

Reader "AC" occasionally pings me with some interesting comments and perspectives. Here's another one.

I wanted just to share some elements to put in perspective things about Greek bailout.

Greece is a small country with small GDP, but please consider the ratio of the bailout and guarantee vs GDP.

The new bailout is €86 billion. That is 40% of GDP! Should people put the same percentage to the size of the state they live in, they would understand much better what this bailout means.

Schauble asked for €50 billion guarantee. In effect, Schauble seeks a Greek guarantee 1/4 of the country's GDP. Is this reasonably possible?

People involved in the matter have simply lost the sense of proportions and contact with reality.

To further add to AC's perspective, the existing bailouts equal €240 billion. The total bailout will be €326 billion (not counting additional money needed to stabilize the banks, and not counting Target2 imbalances of about €120 billion and growing).

At zero percent interest, assuming a 3% surplus every year, and also assuming every penny of the surplus goes to creditors, it will take Greece 50 years to pay back €326 billion.

Of course, Greek GDP is expected to rise. Then again, I assumed 0% interest, and I also assumed a 3% current account surplus from now until seemingly ever. The math gets much more cumbersome at interest rates that exceed a mere 1%.

As a result of a somewhat dampened outlook among restaurant operators, the National Restaurant Association’s Restaurant Performance Index (RPI) declined in June for the second consecutive month. The RPI – a monthly composite index that tracks the health of and outlook for the U.S. restaurant industry – stood at 102.0 in June, down 0.4 percent from May and its lowest level in nine months. Despite the decline, June represented the 28th consecutive month in which the RPI stood above 100, which signifies continued expansion in the index of key industry indicators.

“Although same-store sales and customer traffic levels remained positive in June, the overall RPI declined as a result of dampened optimism among restaurant operators,” said Hudson Riehle, Senior Vice President of the Research and Knowledge Group for the Association. “The proportion of restaurant operators expecting sales growth fell to its lowest level in nine months, while operators’ outlook for the economy turned negative for the first time in nearly two years.”
emphasis added 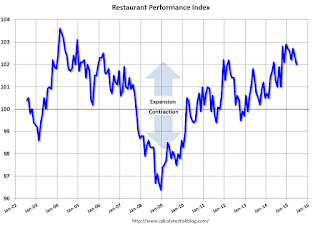 Restaurant spending is discretionary, so even though this is "D-list" data, I like to check it every month. Even with the decline in the index, this is a solid reading.

Succinct summations of events for the week ending July 31, 2015

1. Durable goods increased 3.4% in June, above the 2.6% expected.
2. Case-Shiller home price index rose 4.4% y/o/y.
3. Weekly jobless claims rose to 267k off historically low levels; still very positive number.
4. July Markit services PMI rose to 55.2 from 54.8, a rebound from the lowest read since January last month. The average year to date is now 56.3 and remains below the average seen last year of 57.1.
5. Chicago PMI rose to 54.7, the highest reading since July
6. Japanese labor force participation rate rose to 60%, the most since September ’10, the size of the labor force increased by 390k and the number of employed rose by 340k.

Comment of the Day: Charles Steindel: Runup to Hiroshima: "The [Potsdam Ultimatum] document makes a reference to the 'self-willed militaristic advisors'...

...and in the same sentence refers to Japan as an 'Empire.' Later on the demand is made for the elimination of the authority of 'those who have misled and deceived the people of Japan.' It's clearly directed at the people in power at that time, which could include the Emperor, but there's nothing here that demands the complete dismantling of the imperial institution. 'Unconditional surrender' is specifically directed to apply to the Japanese armed forces. Also, the term 'utter devastation' is a strong indication of what might be coming.

Must-Read: Noah Smith: Growth Fantasy of Tax Cuts and Small Government: "Jeb Bush says that if he's elected president he wants to get us to sustained gross domestic product growth of 4 percent a year...

...I'm highly skeptical, and I'm far from the only one. But there are some true believers... John Cochrane, for example, has a long list of structural reforms that he thinks will do the trick. Now some of these are probably good ideas, and some are probably bad. But... belief that we can reform our way to sustained higher growth... boils down to faith and hope. There are many cases where that faith and hope has turned out not to be justified. For example, there is the case of the... American Legislative Exchange Council, a think tank comprised of state senators and representatives from a number of large corporations... Arthur Laffer.... Every year, ALEC produces a report called 'Rich States, Poor States,' in which it ranks states according to how business-friendly their policies are.... Alec lists 15 factors that it claims boost state growth rates. These boil down to low taxes, low levels of government spending and light regulation... the ideas John Cochrane describes, and that pro-free-market economists have been promising us will boost growth since time immemorial.... Shrink the state, cut taxes and the economy will grow.

But do the policies work? Empirical evidence suggests that they don't deliver. Menzie Chinn... found... ALEC rankings didn't predict a state's growth within one year, three years or six years.... Supposedly pro-business policies, of the type constantly urged on us by conservative think tanks and rightward-leaning economists, are just not that effective in generating growth.... Don't believe that Jeb Bush can deliver on his 4 percent growth promise simply by lowering taxes and easing regulation. As for the more radical steps John Cochrane suggests... many of these radical free-market policies would deliver a lot of economic and social disruption for very little actual growth.

...Fact-checking organizations please note, by the way. The next time Democrats say that Republicans want to destroy Medicare, and Republicans start screaming that this is a lie, remember that when talking to their own people like Jeb themselves call what they’re proposing a plan to, yes, end Medicare.... The original idea... was that Medicare... a single-payer system of government insurance... could not act to control costs.... There was much sneering and scoffing at the... Affordable Care Ac['s] cost-saving measures.... But we’re now five years into... a spectacular slowdown in the growth of health costs, with the historical upward trend in Medicare costs.... How much credit should go to the ACA? Nobody really knows. But... the case that universal health insurance is affordable has never looked better. It’s amazing, isn’t it? Who could have imagined that conservatives would keep proposing the exact same policy despite strong evidence that they were wrong about the facts? Oh, wait.

Live from Bullwinkle Plaza: Ezra Klein: On Paul Krugman's theory of hipsters: "Krugman suggests that hipsters are signaling a rejection of the workaday bourgeois world by flouting conventional dress codes...

...I think the truth is closer to the opposite: They're signaling a mastery of the workaday bourgeois world by flouting conventional dress codes. You can find a gentler version of this in Silicon Valley, where hackers proved their skills so valuable that they won the right to dress however they wanted. Eventually, shorts and sandals became something weirdly close to a uniform. To wear a tie to work came to signal that you weren't good enough at coding, and thus didn't have the market power and independence to not wear a tie....

I suspect something similar is going on with topknots and tattoos. The trappings of the urban hipster don't signal the absence of a job but rather the presence of the right kind of job — the kind of job that values your individual, creative talents enough that you can be covered in ink and a lumberjack's beard and still pull down a comfortable wage. That's particularly true when you spy the aesthetic in the hipper parts of Brooklyn, which have become wildly expensive places to live. In a city otherwise full of people who became rich at the cost of becoming boring, it makes sense that the residents would develop a way to aggressively signal that they had become rich without becoming boring. Whether the signal is actually true is, of course, a whole different issue.